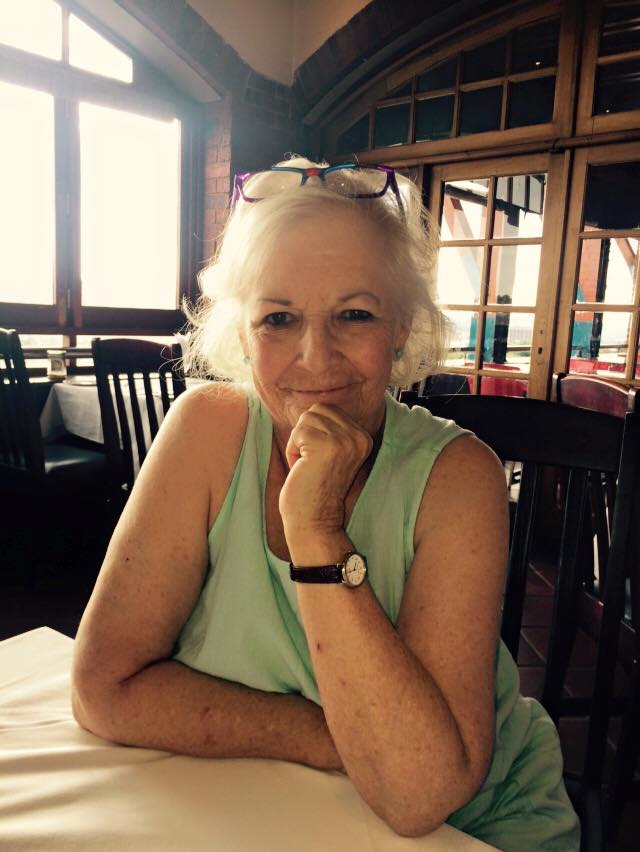 Caroline was born in Johannesburg in 1940. The family moved to Simon’s Town before the end of the War with her step-father, who was a Naval Surgeon based in Simon’s Town.  Accommodation was scarce there so they lived in a cabin off the wreck of a ship, in the grounds of the well-known Glancairn Hotel!

After the War they sailed on a Troop Ship to Liverpool in order to settle in Yorkshire in the United Kingdom where her stepfather started up General Practice in Harrogate.

Caroline went to two schools in  the town of Harrogate until, at the age of nine, was sent to board at a school in Cumberland.  The town was Seascale and was well-known for the Nuclear Power Station, Sellafields, under which, Calder|Girls’School was sheltered!  It was at that school that Caroline started to show a very great interest in Art and crafts. She could not wait for those classes to come round each week and began to excel particularly in portraiture.

In 1955, her mother and step-father decided to remove her from Seascale because of the rumours of the dangers of nuclear fall-out from Sellafields.  This saddened Caroline immensely as the freedom of the sea, sand-dunes and lack of constructive tuition had provided her with six years of freedom from the confines of the more traditional boarding schools! Before leaving, she asked if she could take her Artwork with her and was informed that the school would be keeping it all in order to exhibit her art in the future.

The next Boarding school was to be in Harrogate, her home town.  It was The Harrogate Ladies’ College which was situated on the opposite side of the road to the family home!  At night, Caroline would look out of her dormitory window straight in the family lounge and see her mother knitting!  Weekend school walks resulted in the school “Crocodile” passing by the front gates of her home and finding one less student arriving back at school.  It was a strange arrangement.

However, the Art Department at Harrogate Ladies’ College was superb.  It was headed up by Miss Jean Radford who was an incredibly enthusiastic teacher of Art and the History of Art.  It was here that Caroline developed her love of painting.  In 1957 she passed her GCE Art exams and one year later, her A level Art and History of Art.  She was awarded prizes at the Annual College Speech days.

In 1958 she was accepted into the Harrogate Art College where she obtained her Diploma, majoring in sculpture and dress design.  Then came a move to Leeds College of Art where Caroline studied until she got  married in 1961. She has worked in Art in many forms since then.

She helped form a Company creating wool wall coverings. These panels came in many sizes and designs and were creating in a marquetry form. They were used by outlets such as Marketing Boards, night clubs, hotels, restaurants etc.  They were individually designed for the client.  She exhibited this product extensively particularly in London. Freelance Art and design have been part of Caroline’s life until the present day.

In 1982 Caroline returned to South Africa where she joined the Watercolour Society of South Africa and was appointed their Vice Chairman in 1883. She sold many of her paintings through the Society.  She has worked on logos for various companies, done fashion drawings for others, painted portraits, and make line-drawings for company products.  Caroline has taken part in several exhibitions. Her paintings have travelled to America, UK and France.

She studied ceramics at the studio of Rika Herbst and is a member of the Ceramics Society of South Africa.  She has entered both the Regional and National Exhibitions of the Society and received awards and sold her work. At present she runs a studio from her own home in Johannesburg, teaching art and ceramics three or four times weekly.